Veteran and LGBTQ communities lead the conversation on suicide prevention

Over a hundred month-long observances are marked in September: National Save Your Photos Month, National Children’s Good Manners Month, National Bourbon Heritage Month, and International Self-Awareness month are a few of the more obscure commemorations.

As such, it’s a time when communities and individuals work to raise awareness of the often stigmatized social reality of suicide. Organizations like the National Alliance on Mental Illness (NAMI) have worked for decades to reveal suicide for what it is – a serious national health problem. NAMI actually utilizes the phrase “social contagion” to describe the devastating impact of suicide on society. They use the month for programs aimed to shift public perception, share vital information about suicide and resources for those affected by it*, and to spread hope and information regarding support for those who are considering suicide.

(2022 marks an especially important year in the battle against the epidemic of suicide as the National Suicide Prevention Lifeline announced its new, shorter, simpler lifeline number, 998!)

However, the planned programming of these organizations is not the only avenue of action we’re seeing. Social media intelligence reveals thousands of individual voices speaking up to advocate for suicide awareness and better support for vulnerable communities. They organize support groups and gatherings, and express support for considering suicide, as well as those affected by it.

In honor of Suicide Prevention Month, we used Infegy Atlas to lean into and understand the communities, voices, and concerns around suicide awareness and prevention.
Social media intelligence once again had surprising insights for us; most significantly, revealing an intersection between two communities that doesn’t typically manifest in real life.

Two of the loudest, most intentional communal voices in the conversation around suicide prevention and awareness belong to seemingly disparate communities – Veterans and the LGBTQ community. While these communities may not have visible interactions in the physical world, their joint engagement with suicide prevention and awareness online has pushed the conversation forward.

Here we share insights into the conversation around suicide prevention and awareness, using Infegy Atlas’ array of metrics and filters to zoom in specifically on these two communities’ conversations.

One of the goals of national organizations like NAMI is to eradicate the stigma and silence around suicide, trauma and mental illnesses that lead to suicide. In this regard, our social media intelligence platform shows heartening results.

The generic conversation around suicide prevention and awareness has indeed grown online over the past decade. However, there’s an even higher post volume from individuals who self-associate with vulnerable communities: veterans, the LGBTQ community, and teenagers.

As we mentioned above, two of the loudest, most intentional communal voices in the conversation around suicide prevention and awareness belong to seemingly disparate communities – veterans and the LGBTQ community.

In other words, when we dove into conversation around suicide prevention, looking at the communities in the conversation (individuals whose online profiles and posting shows that they identified as belonging to or supporting a particular group), we found that the Veteran and LGBTQ communities had strong topical intersections connecting their conversational areas (Figure 2). Both clusters were connected by hashtags #SuicidePrevention, #SuicideAwareness, and #MentalHealthAwareness. 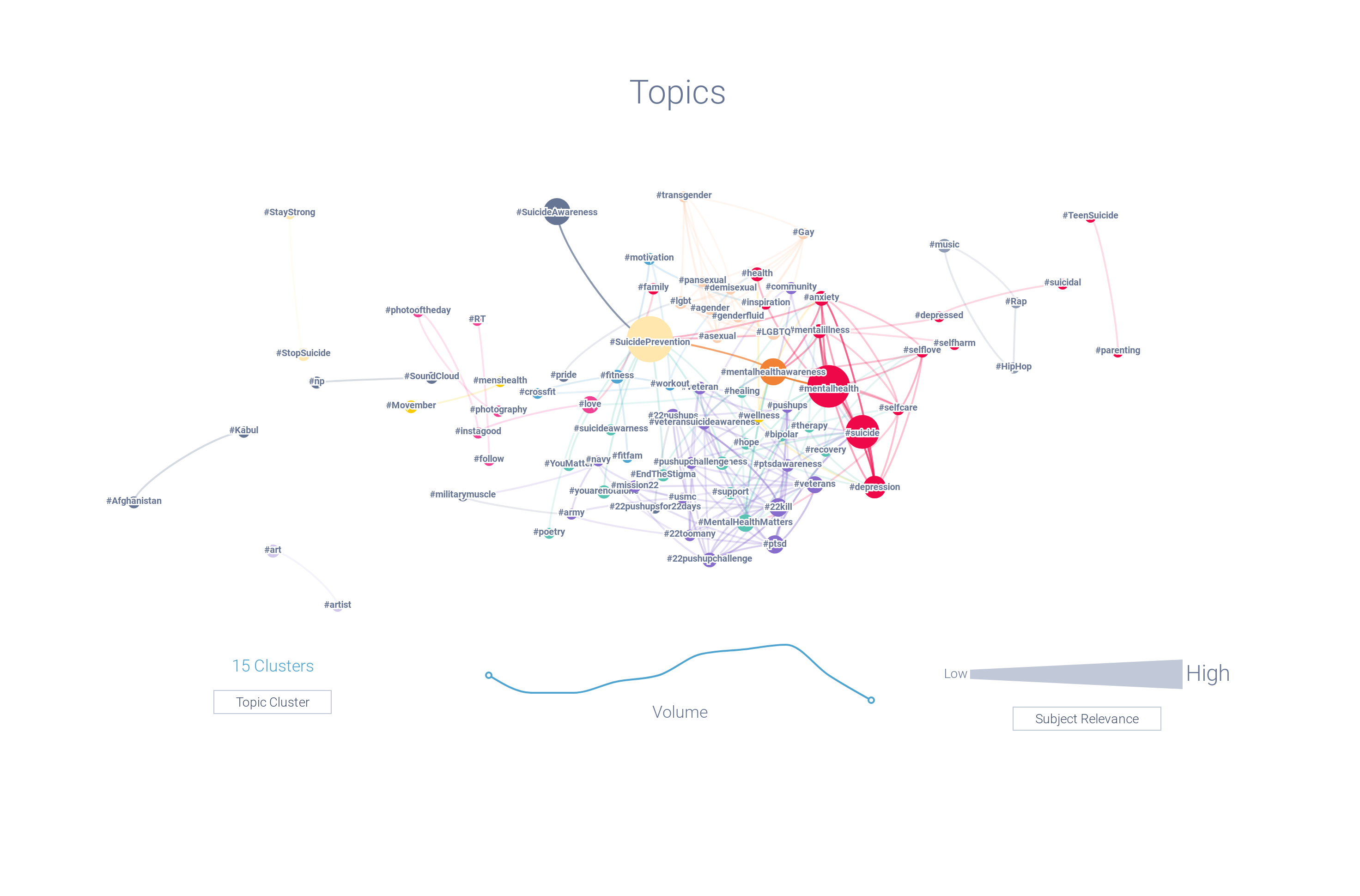 When we dive deeper into the data from Infegy Atlas, we’re able to see the nuanced approaches each of these two groups take: how they inspire and advocate for suicide prevention and awareness, how they show support for potential victims, and their reflections on the causal factors that lead to suicide within the different communities.

For example, linguistic analysis of the conversation from the LGBTQ community associated with suicide shows topics like sexual assault, bullying, and depression rising to the surface, thus revealing the underlying issues that perpetuate suicide within the community (Figure 3). A similar analysis of the veteran community’s conversation focuses on PTSD, spreading the word/awareness of PTSD, and the hashtag #22TooMany. 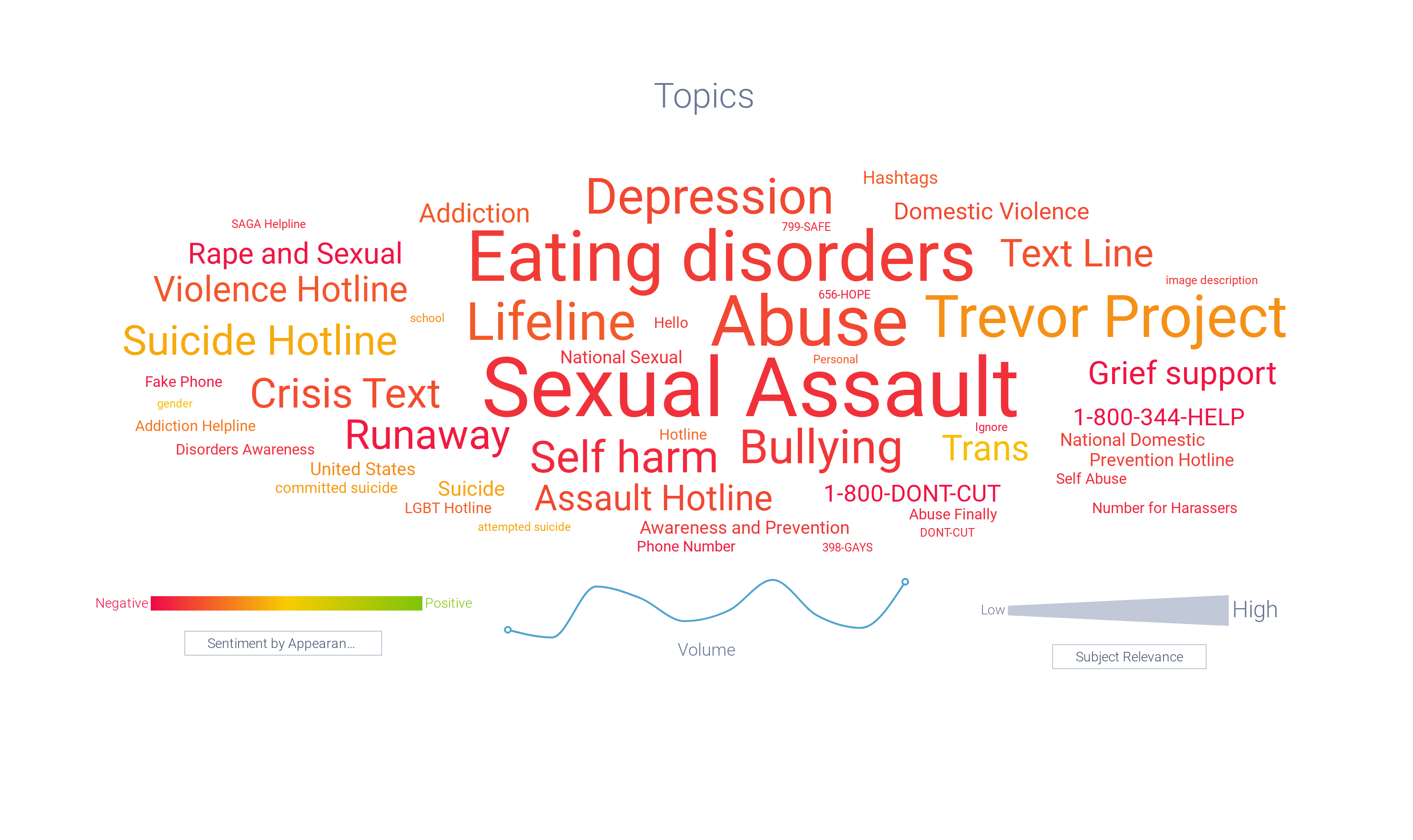 Below, we share some further insights into how the veteran community (including supporters) have engaged the conversation around suicide prevention and awareness, and how Infegy Atlas points us to this insight.

Veteran Community: Volume and demographics of the conversation

Examining the conversation and source bios of the authors, our first observation was that the majority of those discussing suicide prevention are veterans, not active duty military.

Next, the volume of suicide prevention conversation by the veteran community has grown 221% over the last ten years. This post volume growth is five times higher than the growth of the “generic” suicide prevention conversation. This means the veteran community is showing up loudly, profusely, and consistently online to spread awareness and show support!

In terms of gender distribution, females make up nearly half of the conversation. This is notable because, according to the U.S. Department of Veterans Affairs, female veteran suicide victims made up less than half of the male per-capita suicide rate in 2015.

In other words, even though the percentage of veterans who commit suicide are dominantly male, the fact that women share nearly 50% of the conversation is saying something (Figure 4). This reiterates that the people talking about suicide are not just the ones who are subject to being victims of suicide, but include those who are in the community of support and awareness, and speaking up online. 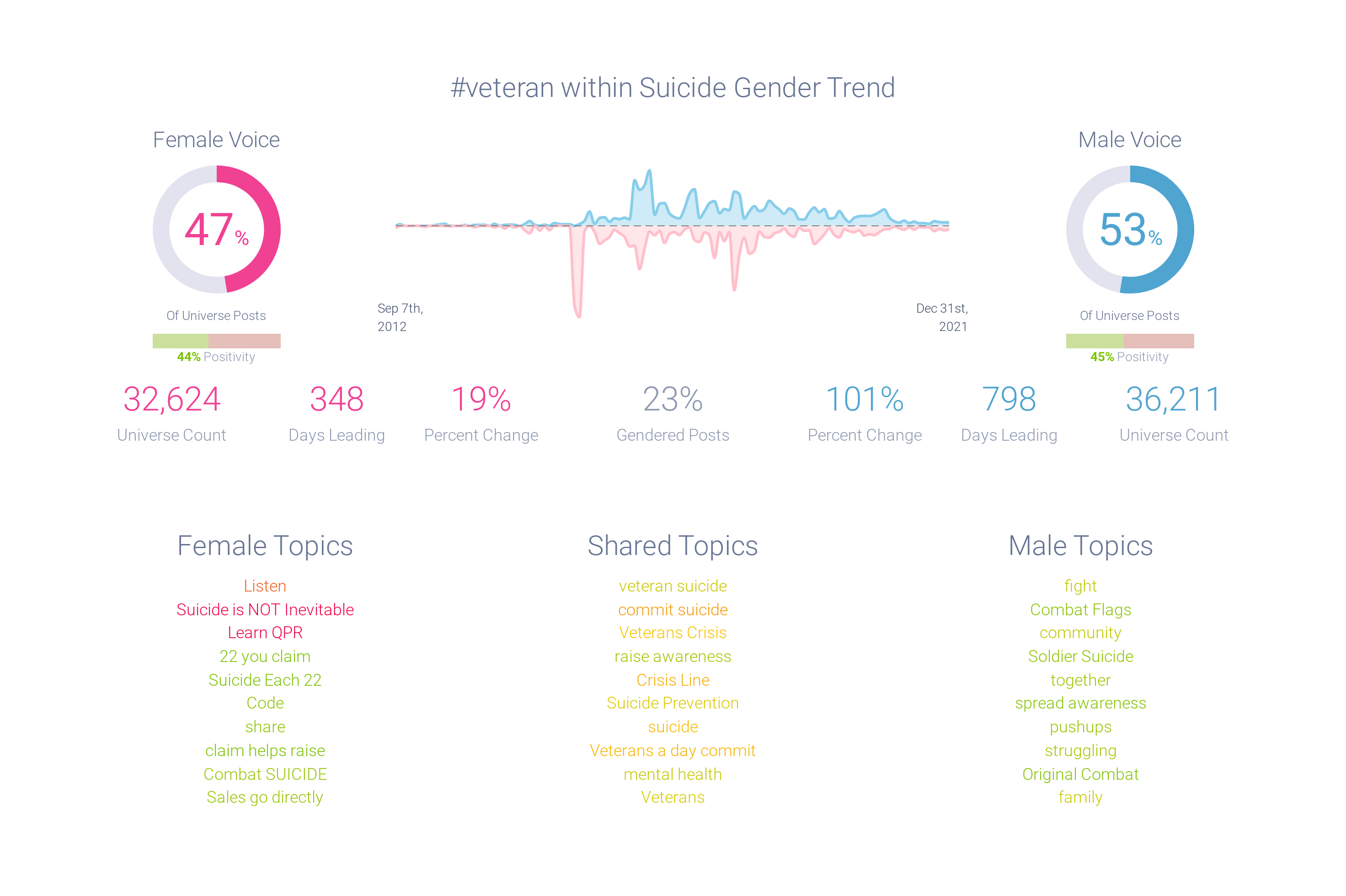 Figure 4: Gender distribution within the veteran community's engagement with suicide prevention and awareness.

Veterans and a support community around fitness, and mental health awareness

The veteran community posts under hashtags #22toomany, and the fitness challenge hashtag #22pushupchallenge. The first is a reference to the number of active and former military members who fall to the epidemic of suicide on a daily basis (approximately 20, which is “too many,” hence the catchphrase and hashtag #22), and the second is an example of hashtag activism used to spread awareness of veteran suicide and grow awareness of the effects of PTSD

Related: Read our blog, “Hashtags save lives: Analyzing the impact of online activism”
to learn how you can measure your hashtag campaign.

The topic network (Figure 1) and linguistic analysis of the conversation depicts strong connections to fitness and wellbeing hashtags, and spreading awareness – including #PtsdAwareness. This again provides heartening evidence that online communities are pushing back against the stigma of discussing PTSD, and instead drawing mental health into the fitness conversation.

All in all, social intelligence suggests that veterans approach the conversation by shedding light on the epidemic, resisting it through an awareness campaign and hashtag activism for the pushup challenge, and growing communities of support for veterans through fitness and wellbeing – including mental well-being.

Real world data suggests that the combined efforts of those spreading awareness to reduce the stigma of discussing veteran PTSD and mental illness efforts are indeed bearing fruit! When compared to reported data from the U.S. Department of Veteran Affairs, Infegy intelligence shows that the growth of the online conversation outpaces the rate of increase in veteran suicide. The VA also released a report in 2021 sharing that 2019 saw a decrease in veteran suicides, one that was unprecedented across the last 20 years!

Just in case you were in any doubt before, be heartened that online communities of support and education do perpetuate change. They can also impact your campaigns, organization’s social efforts and of course, business endeavors.

If you’re wondering if Infegy Atlas is the tool you need to understand your audiences, discover their pain points, and what inspires them to act, request a custom demo!

*If you or someone you know is experiencing a mental health crisis, call or text 988 immediately. If you are uncomfortable talking on the phone, you can chat the Suicide & Crisis Lifeline.