The News Feed: The revolution of media consumption

Did you know that Mark Zuckerberg’s first idea for a site was Facemash, where users could pick the hotter person? Not surprisingly, Harvard balked at the idea and threatened him with expulsion.

His second idea was an online student directory called Thefacebook, which was exclusively a directory of Harvard students. Then it allowed anyone over 13 years of age. From there, it continued to grow. Amazingly, a few engineers at Facebook changed social media culture by introducing the News Feed in 2006.

Here, we’re going to look at Facebook’s News Feed, how it evolved, and how engineers created algorithms to curate content for its users.

The News Feed changed how users used social media, got their news, and received personalized recommendations from popular platforms.

A brief history of the News Feed

The News Feed is a live, infinite, and automatically updating feed that shares a user’s activity with their connections on a social network. It was introduced by Facebook in 2006 when Ruchi Sanghvi and her team designed a system that pulled every interaction or update that a user posted. It then broadcasted the activity to all of the user’s friends in a live, ever-populating feed. Soon every time a user friended another person, posted a photo, updated their stats, or liked a page, it would appear on their friends’ News Feeds. Social networking went from being a static, phone-book-style app to a perpetual, dynamic way for users to stay connected with their friends. And it changed how people viewed and used social media in their everyday lives.

According to a September 12, 2013 article in Slate by Farhad Manjoo. The introduction of the newsfeed was “the inspiration for just about every social-media feature that has come along since.”

Facebook’s network structure went from static and directory-style to a massive dynamic network system. The News Feed was the impetus for a site redesign which received mixed responses upon its introduction.

Are you interested in Infegy Atlas to discover hidden market and consumer trends? Schedule a demo.

The initial algorithm was simple and non-invasive, but many Facebook users viewed it as violating their privacy. Infegy Atlas social sentiment analysis shows that between 2007-2009 Facebook users repeatedly complained about the initial implementation of the feature, specifically the privacy violations (Figure 1). 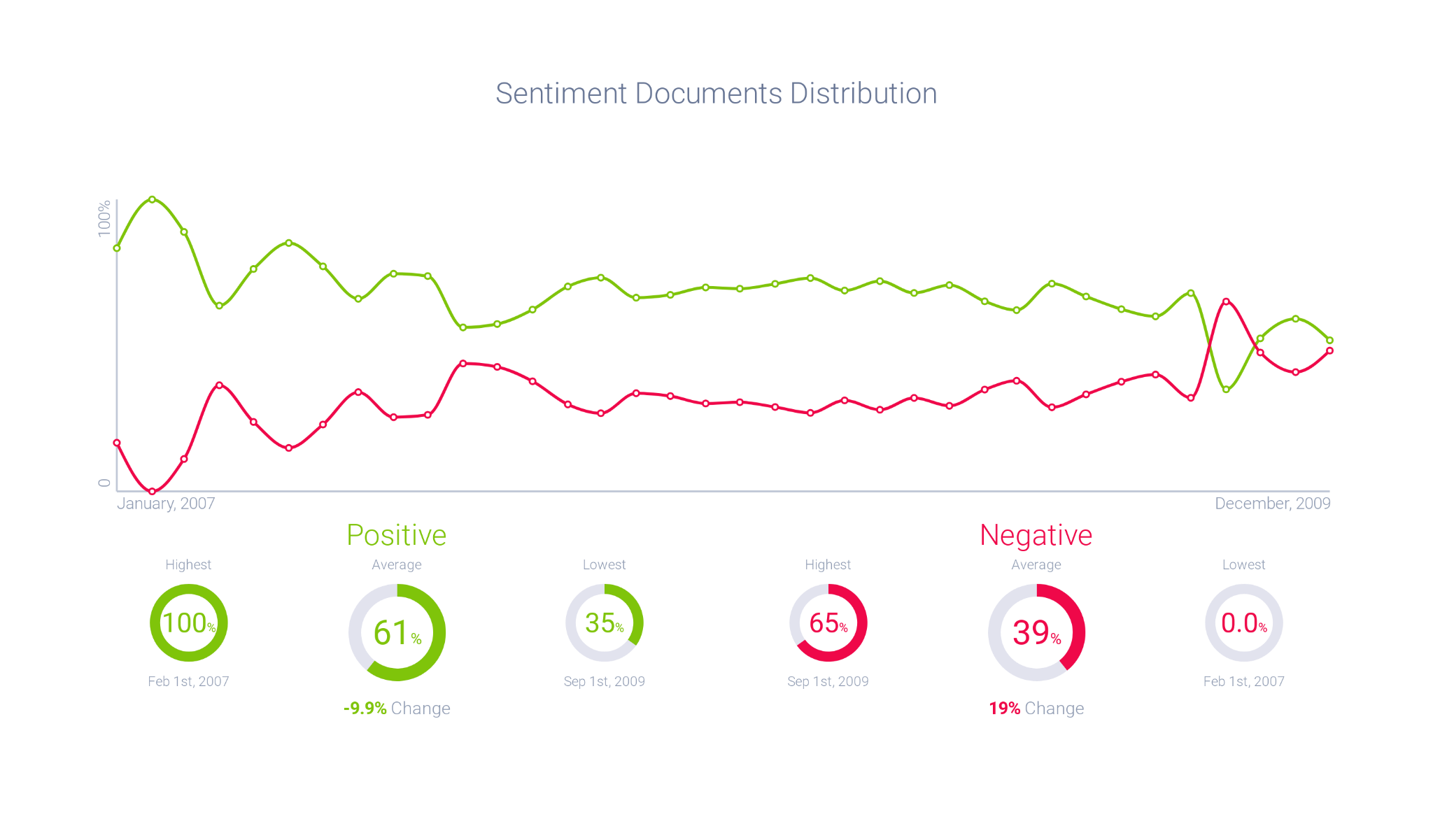 In 2009, Facebook debuted its first algorithm that bumped posts with the most likes to the top of the News Feed. It has regularly updated its algorithms to measure and rate user engagement and push content to users based on their activity, including content made by other users. This algorithmic type of fetching technology became pervasive quickly across the internet. It can still be seen today on sites like Instagram, Pinterest, Reddit, and YouTube.

Impact 2: From passive to predictive feeds

From its inception to today, the concept of social networking has changed from user-centered to network centered.

Let’s take a look and see how Facebook’s News Feed has changed over the years:

Up until 2016, Facebook’s algorithm changes in the News Feed focused on giving users relevant posts from fellow users like friends and family. Compared to after 2016, when the focus turned more towards using algorithms to predict what a user wanted to see and then promote that curated content to the top of their feed.

While users still used Facebook News Feed to stay in touch with friends and family, they also started to rely on it more and more as a source for getting actual news. The impact of this shift has been far-reaching.

Impact 3: A tool for marketing

The Facebook News Feed started a revolution in algorithm-based fetching technology that touches many things we see and do daily. Just about every site from YouTube to Netflix to Amazon, wherever you go online and leave a digital trace, you’re more than likely to receive recommendations on content and products based on your activity.

Algorithms have become very good at predicting content and products that we will like. A Harvard research paper says that even though people don’t trust recommender systems, they “outperform friends, family, and significant others.” Even in areas where humans should have a decided advantage, like predicting what is funny.

As Facebook drops “News” from News Feed, it has ultimately helped to change where people look for their news. The latest report from Pew Research shows that nearly a third of all Americans regularly get their news from Facebook, and almost half get their news from social media in general. This shift coincides with the decline in people turning to traditional media sources for their news.

The News Feed has had an impact on where people get their news and how long they spend reading the content they receive. For example, a Forbes article says that a visitor will read an article for an average of 15 seconds and watch an online video for 10 seconds.

Consumer intelligence data from Infegy Atlas shows a similar trend with average post lengths as people have been posting shorter and shorter content over the past 15 years (Figure 2).

When Facebook introduced the News Feed in 2006, it changed how people interacted with social media. Gone were the days of static, phone book-like directories, and here are the days of a continuous stream of live updates from your friends. A year later, Facebook introduced the like button and began using fetching technology to give users an algorithm-sorted stream of recommended content. These systems power nearly every social network today.

Over the past 15 years, social media has shifted from user-centered to network-centered activity powered by algorithmically amplified, curated content. People no longer had to go out and look for content. Instead, they were constantly being fed content curated and promoted just for them. The definition of news and how people consume it changed. And so made their reading and viewing habits away from long-form content to digestible, sound-bite-focused content.

In the end, billions of people turn to social media every day to interact with others, be informed, and for entertainment. It makes social media the best place to find valuable insights into markets of all types and consumers in any market.


If you think social media intelligence could give you the insights you need, or just want to learn more about Infegy, we’d love to hear from you!