Cryptocurrency design is shaping social media and what this means for Web 3.0

Recent data published by the Pew Research Center indicates that users between 18 and 25 have been using social media less since 2019.

Younger users are fed up and have lost their trust in mainstream social media. This is largely due to repeated privacy violations, data leaks, and its overall toxic environment.

These issues have forced younger users to move from large distributed networks to smaller decentralized ones.

Here, we’ll look at why social media is shifting towards decentralized networks, how cryptocurrency technology is influencing social media, and what this means for the social media landscape of Web 3.0.

The internet is constantly and rapidly evolving.

Web 1.0 was the original internet, with bulletin-board style sites with static, text-based content. Today’s internet is Web 2.0, where users can interact with dynamically changing content, hosted on centralized servers owned and controlled by large media companies.

A large part of the transformation from Web 1.0 to Web 2.0 was the emergence of the online payments company, PayPal. This shift happened because PayPal required “real-name” or real identities and personal information to make digital financial transactions.

[You can learn more about Paypal’s influence on social media and what historical social media data reveals in our free technical report, The Evolution of Social Media II: From Public, Centralized to Private, Decentralized Social Networks]

Facebook was one of the first social networking sites to require a real name when creating a profile. Other social media companies quickly followed suit. As a result, users became comfortable sharing private information online, promoting trust, transparency, and openness in online communities.

However, this sense of trust and openness began to erode quickly.

This sentiment has led many, especially Gen-Z users, to seek decentralized private apps and closed online communities. All this hearkens to Web 3.0 and gives us a picture of its nature and structure.

Are you interested in Infegy Atlas to discover hidden market and consumer trends? Request a demo today.

Just as in the past, when PayPal and Facebook helped usher in Web 2.0, a new financial system, cryptocurrency, is perpetuating drastic changes in the structure and culture of social media in Web 3.0.

Decentralization and anonymity are two of the hallmarks at the core of cryptocurrency design. Cryptocurrencies rely on distributed ledger technologies, like blockchain, that facilitate how users acquire, buy, and sell cryptocurrencies.

These transactions occur entirely independent of centralized funding institutions like banks. Instead of linking the identities of payers and payees to personally identifiable information, transactions are associated with pseudonymous placeholders that require an additional step to link to their actual identities.

This structure builds a layer of anonymity into the cryptocurrency system, and the blockchain network that acts as the backbone takes significant time and resources to reverse engineer to reveal the identities behind the transactions.

The ideology and structures of cryptocurrency have already begun to influence social networking. It has led to a movement to scale decentralized, encrypted communities into the overall network, essentially paving the path to Web 3.0, and generating much online conversation along the way.

Social media intelligence from Infegy Atlas shows a meteoric increase in conversations around “Web 3.0,” with a 1200% increase in post volume over the last five years (Figure 1).

An era of platform decentralization

It’s important to note that decentralization and blockchain are not the same from a technological perspective. However, they both are examples of federated networks’ applications to replace existing centralized networks.

New social networking platforms are utilizing decentralization technologies and design; the most notable example is Mastodon.

Mastodon is an open-source Twitter-like social network founded in 2016 by a collection of programmers who promoted and allowed free use and application of their program. While Mastodon does not utilize blockchain, it does apply decentralization principles to create a distributed or federated social network (Figure 2).

Anyone can create an instance using Mastodon’s publicly available code. While these instances can talk to each other, there is no central organization to regulate online behavior or enforce any “real-name” policy.

The Mastodon community views themselves as alternatives to centralized organizations and is adverse to having a centralized company manage them. Infegy Atlas data shows #DeleteFacebook as one of the top performing hashtags in their conversations. Furthermore, linguistic analysis reveals the largely negative sentiment surrounding #DeleteFacebook (Figure 3). 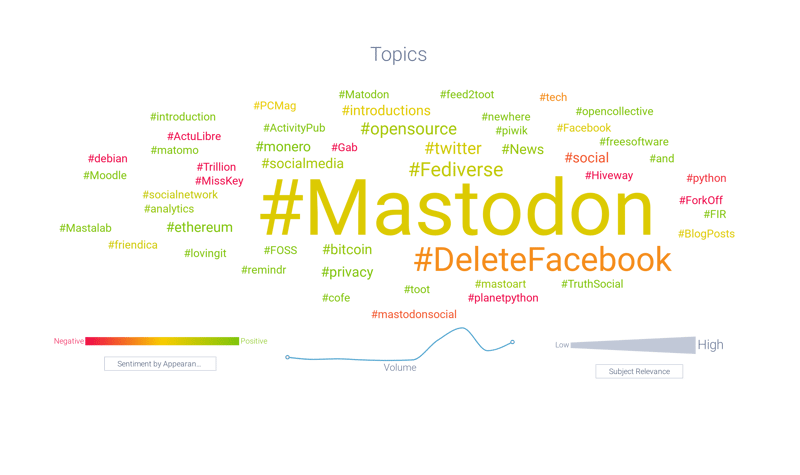 Infegy Atlas’s social media listening data and audience analysis show a 714% volume growth in posts related to Truth Social, with post volume still trending upward in July of 2022. Since Truth Social is built on Mastodon’s open-source code, the site’s popularity is likely to draw even more attention to its original, decentralized framework (Figure 4).

Users are turning to federated networks, either decentralized, P2P, or blockchain, and away from mainstream social media networks.

Ultimately, cryptocurrency and blockchain technology, with its decentralized, distributed ledger network, is helping inspire other federated networks to provide users with more privacy and control of their content.

Gathering social media intelligence to gain a deep understanding of your audience will become even more important as we move toward Web 3.0.

As social media users trend towards decentralized platforms online, and social platforms raise the standard on privacy laws, discovering and getting in front of your target audiences will require deep, real-time consumer intelligence that goes well beyond social monitoring.

It will be necessary to gain a thorough understanding of your audience’s interests, consumer passions and customer interests by listening to what they are actually sharing online.

If you’re interested in learning how social listening and Infegy social media intelligence could get you the insights you need, we’d love to hear from you! Schedule a demo today!