Series: The Evolution of Social Media

Does anyone remember texting back and forth with a friend, and then telling them you’d email them photographs when you “got on the internet”? Or how exciting it was when you learned there were typographical codes that would automatically convert into tiny little images – called emoticons –  like a red heart or a smiley-face (if you were using a facilitating chat or email service)?

In the not-too distant past, a picture could say a thousand words, but text was the format that “went the distance” fast on social platforms.

The days of text-based communication on social media platforms are long gone now – replaced first by quick and easy photo-sharing, followed by video, and – according to Meta – the ultimate immersive experience of a virtual reality is just around the corner. This trajectory towards more visual, immersive formats on social platforms has been propelled forward by a two-pronged technological revolution: on one side, we’ve seen advances in networking infrastructure and speed, and on the other, meteoric developments in computing and digital technology. Here, we survey the advances in networking that changed the primary communication formats used on social media. We’ll dive into some of our historical social data to examine consumer voices during the major moments in the transition from text-based platforms to the use of more visual formats.

[Note: for an in depth, technical inquiry into this history, and the move towards augmented and virtual reality, download our free, newly released technical report, “The Evolution of Social Media Part I: From Textual Communication to Immersive Experiences.”]

From dial-up to mobile web: the democratization of internet access

In its genesis, the early internet, called USENET, was mainly used by academics and governments. Dial-up ethernet which used phone modems was the predominant network structure in the mid-80s. Tim Berners- Lee invented the World Wide Web in 1989, which gave the public access to the internet. Very shortly afterwards, in the early 1990s, commercial internet service providers began offering internet service to households. This became the first step in the democratization of internet access.

With more non-academic, non-government users on the World Wide Web, the use of the internet for social communication began to grow, and early social networking sites (SNSs) began to emerge, the very first one being Six Degrees (1997). At this time, however, the World Wide Web was a text-heavy environment. Since dial-up essentially shared the same copper-wire transmission infrastructure as telephones, as an interface it could only handle “light” data like text. Images are more complex, robust pieces of data and need faster speeds of transmission.

The evolution toward faster, more expansive networks began in the early 2000s in the form of broadband. Broadband was thicker in diameter, made of fiber optic cable, not copper; and dedicated for internet transmission. These factors combined, allowed users to browse the web, download, and send files faster. As its use got more efficient, using the internet for daily and social communication grew even more popular. American Online (AOL), a company that had a virtual monopoly on dial-up but didn't anticipate the adoption of broadband as the primary vehicle for networking, soon became obsolete. Historical data from Infegy Atlas data depicts a decline in AOL’s influence beginning in 2007-2008, measured by a reduction in AOL-related post volume. This post-volume continued to decline by 90% over the next 15 years (Figure 1).

As a new technology, broadband was initially expensive and not widely available. However, its popularity and accessibility continued to grow through the early and mid-2000s. According to Pew Research, January 2007 was the first time more than half of America had access to broadband internet via satellite or cable. That grew to approximately 70% by the end of 2015 (Figure 2).

Social media analytics from Infegy Atlas reiterate the wide-scale adoption of broadband, showing sharp uptrends between 2007-2008 (Figure 3). With the expansion of broadband, internet-use – including the use of social media – became increasingly essential to everyday life.

The telling of history diverts at this point: did the rise of smartphones fuel the development of the mobile web, or did the existence of a mobile web lead to the emergence of smartphones and mobile devices that could connect to the internet? Surprising as it may be, mobile web technology existed as far back as 1997 and, when mobile web access expanded for public consumption, its popularity grew even more impressively than broadband: between 2012 and 2017, mobile internet traffic went from 10.88% of global internal traffic to 54.09%.

In a sense, the advent of mobile web completed the democratization of internet access. Where broadband required cable-installation – a difficult feat in remote and inhospitable terrain – mobile web technology transmitted through airwaves. Relevant to the development of social media however, is that mobile data got progressively faster during the last decade. We dove into historical social data around the use of different wireless technologies and charted how the 2010s moved from 2G and 3G bands to 4G to finally 5G bands (Figure 4). These massive data pipes literally and figuratively paved the way for social media users to send billions of photos across the internet, marking the switch from text-based communication to photo-sharing on social media.

Facebook was the first platform to integrate the prolific use of images into social media (2005). It also did so, well in advance of other SNSs. For example, Twitter only began supporting embedded pictures in 2010, five years after Facebook’s initial adoption. When Twitter announced they would be expanding features to include images, the news generated a wave of enthusiasm and anticipation. We measured this by looking at consumer intelligence data from Infegy Atlas: we recorded a 12% increase in Anticipation in the month of the feature-release (image-sharing on Twitter), and an estimate of 1.7 million posts discussing the release of all collected channels at the peak (Figure 5). 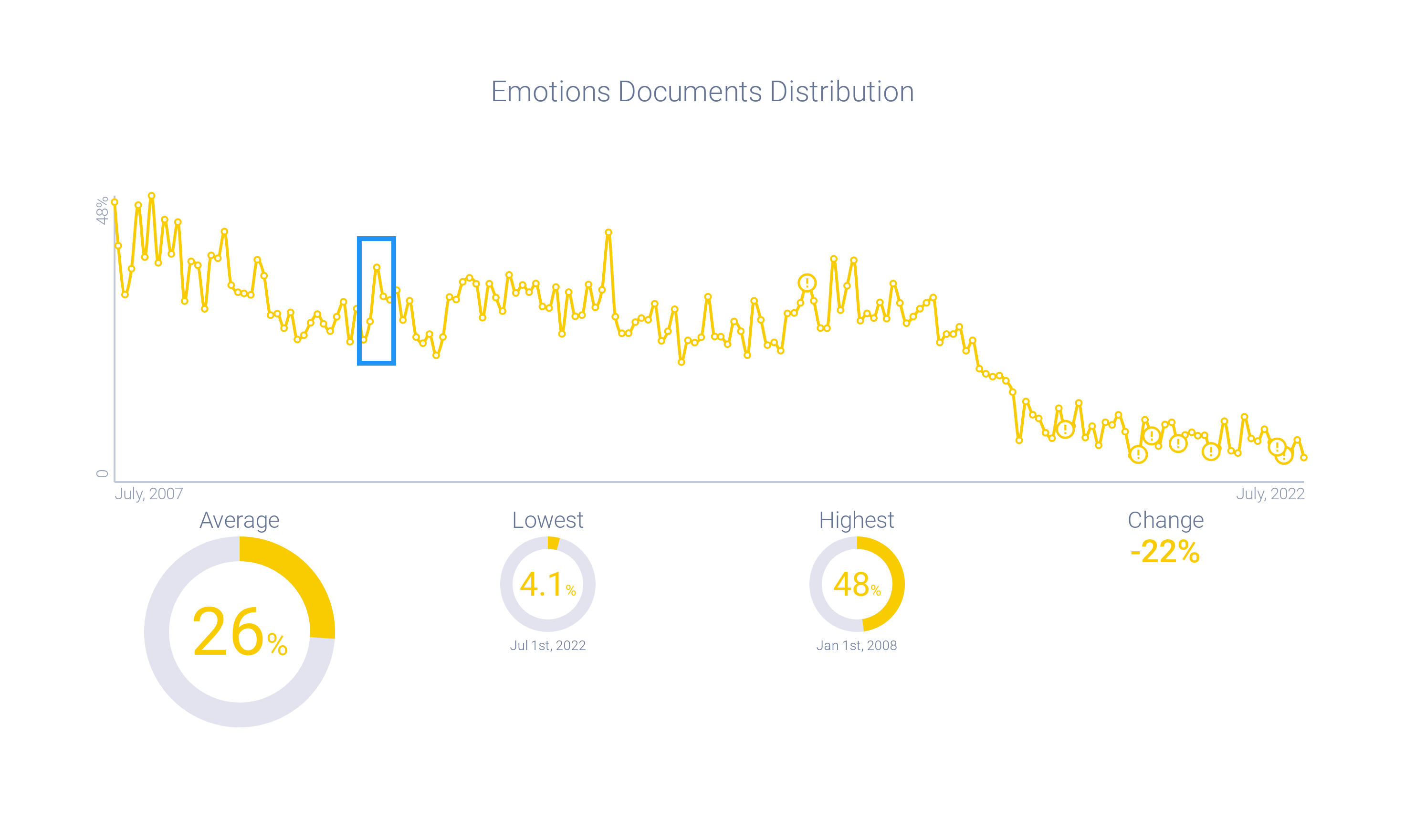 Encouraged by the desire of social media users to share images, and facilitated by the new phone and network hardware, a plethora of mobile apps designed to edit and share these photos began to emerge. Instagram, founded in 2010 and acquired by Facebook in 2012, is the best known. Snapchat was founded a year later in 2011.

Ultimately, the days of text-heavy web were ushered out by the advent of faster, more accessible internet, supported by the massive advances in computing technology and the emergence of smartphones. This transition began with the growth of images on social media, and continued as platforms began to emphasize video over still images. The next question is not whether social media will transition to the immersive worlds of virtual and augmented reality, but who will emerge as the top players in the space, and how the shift will influence business, marketing and planning.

As we mentioned above, you can learn more about how advances in technology facilitated the expansion to video (and how social media platforms are moving towards AR/VR) by downloading our free technical report.

Subscribe to our blog for the next release in “The Evolution of Social Media” series: a survey of how commercial forces motivated the trends that regulate online behavior, particularly user-privacy vs. public sharing on social platforms.